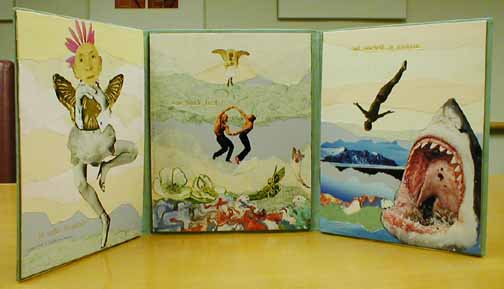 I made this book in November 2002 from three of my own collages (each 8x10 inches on illustration board) that I bound together with light green buckram and gold text. My friend Lois Morrison helped remind me how to bind a book.

The text (that stretches over all three pages) is an inexact quote from Twyla Tharp's autobiography: "In order to dance, you must first set yourself in motion."

The face in the left panel was cut down from Jane Goodall who works with chimpanzees. One of the legs, the one wearing a ballet shoe, is taken from Tanaquil Le Clerq, the fourth wife of George Balanchine whose career ended tragically when she got polio. The other images came from art, news, and nature magazines.

My kids once put a sign on my printing equipment "printing museum" to emphasize the fact that I have a lot of tools around my house that are rarely or never used. These books should put the lie to that.

I used equipment that has taken up valuable space on my front porch for the past twenty five years to set the type for these books: a composing stick, a california job case, and a machine that heats up the type and presses onto gold foil on the cover or page of the book. 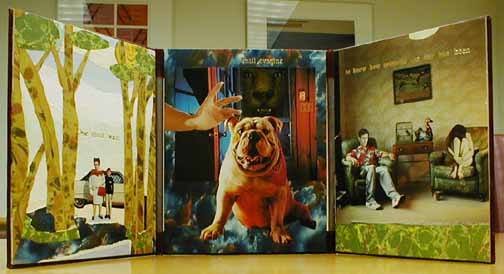 The quotation in this book came from the poet Sophocles: "One must wait until evening to know how splendid the day has been."

The mother and son on the left came from an art magazine and I added the trees from marblized book paper.

The spooky looking lion in the center panel was on a book jacket and the interior scene on the right was an advertisement, but I added the head of a man in the news and the naked woman is from an art magazine.

The pages of this book are each 8x10 inches. It is bound in red material that looks like artificial leather and I did not do a very good job of binding the book because I was busy talking to the boyfriend when I should have been paying attention and I forgot to rub the pages from the fabric side, not the collage side and it looks pretty lumpy from the cover. 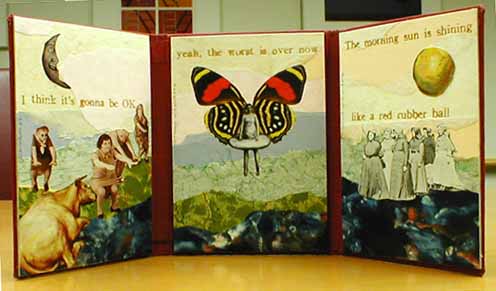 The pages of this collage book are only 5x7" each. The quotation is paraphrased from a Paul Simon song: "I think it's gonna be OK, yeah the worst is over now, the morning sun is shining like a red rubber ball."

The photo of the old ladies exercising on the left came from a greeting card I received from a friend. When you get old, you get those kind of cards.

The photo of the Shaker women on the right is from a postcard. The central figure is part of a painting in an art magazine and the wings are from a nature magazine. 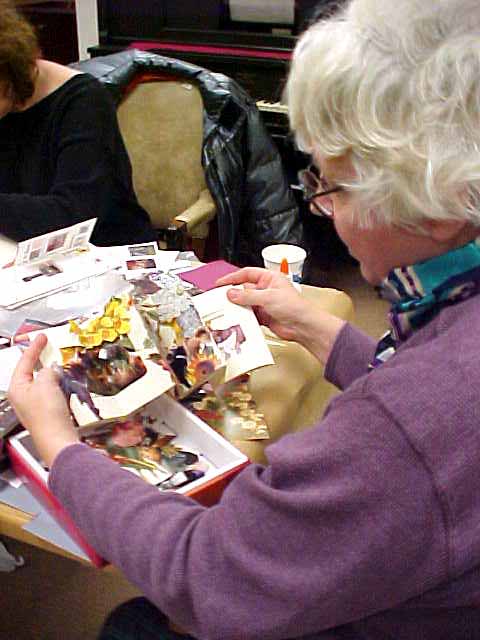 Here I am (in March 2001) making a "carousel" book at a Rutgers University workshop in Newark, NJ under the instruction of my friend and neighbor, Lois Morrison. We took three strips of 24" long paper and folded each into 6 panels varying in width from 3" to 3-1/2" to 4" so that we had three layers of folded paper with space in between. Then we cut windows out of the first two layers, leaving a 1" margin on the first layer, and 1-1/2" around the second.

You can see that I brought a box of cutouts to the workshop, because I have made these books before. They are called carousel books because if you wrap them around they would form a carousel. Only our books have only three "bays" so I guess you would call them partial carousels.

I used white glue to paste photos of flowers and my dogs onto the pages; everybody else used glue sticks but I thought that would not be permanent enough. These books remind me of sugar easter eggs where you peek in and see a picture inside. They also give me something to do with all the photographs I have of my dogs. I only have two dogs, but I use photographs of dogs of my friends, and dogs that I used to have many years ago. 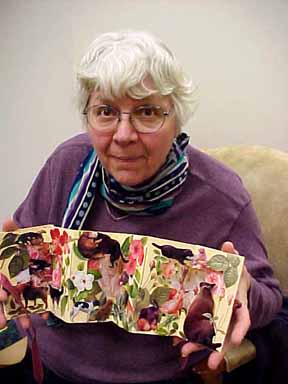 This book is more complete. The dog on the right is a rear view of my pit bull, Dolores, who died December 22, 2000, ten years almost to the day I found her on the street.

The other dogs are a chocolate lab named Moose (who belongs to a neighbor) and my wonderful golden retriever named Ginger who was given to me by a neighbor. Ginger died August 30, 2000 at the age of 9-1/2 and we all miss her very much. There is no dog so loving as a golden retriever.

These book photos, by the way, were taken by Bob Namhory, a physics teacher at Rutgers, with a Sony digital camera.

This carousel book shows my two new dogs-- Tanya the jindo and Mookie the black mixed breed who was found living in a cemetery. 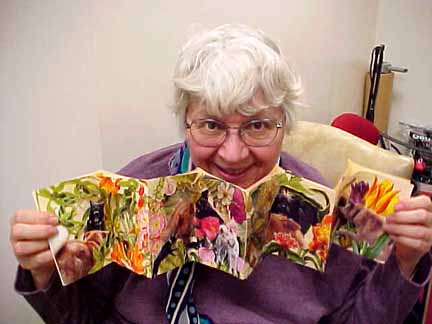 Both are shelter dogs and both are very very smart. They are well behaved in the presence of everything but squirrels and groundhogs, and are great company for everyone but my cat.

This book is almost finished. It needs only covers, to be glued on each end, and ties that wrap around the book and keep it nice and flat.

This photo reminds me that my daughter in law says the pores on my nose are very large. I have saved these photos in "low" resolution so you will not be able to agree with her comments. 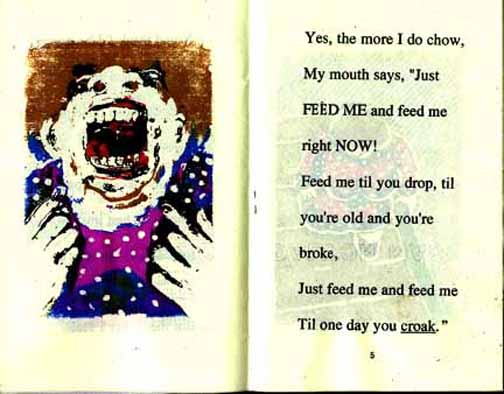 Page from "Fat Lady Lullabye," a book written and illustrated by me. This illustration was first drawn with gouache resist, meaning I painted the lights in white paint, then covered the drawing with black india ink, which settled in the unpainted areas only.

When washed off with tap water, the black ink lifted wherever there was white gouache paint unerneath, and the resulting image resembled a ragged woodcut.

I then used the Gocco printer [a clever Japanese device for instant silkscreens] to silkscreen the image in more than one color at a time. This is possible because the inks are pushed down through the screen against a sponge, not scraped across the screen with a squeegie.

Speaking of books, here is an anecdote I wrote to a colleague recently, that has to do with how I came up with the idea for one of my books.

In my youth, when I was somewhere in my early 40's ...or my very late 30's.... I remember driving to the home of a stranger. I was to drop off artwork someplace in New Jersey, and on the way I was thinking very hard about a book to make.

I was at the time of my youth when I used to be a little ashamed of myself. I had images of my tongue growing hairs and flapping all around a room at a party... In other words, I expended a great deal of energy regretting things (almost always things I had said.)

Well, driving to this place with the weight of my sins on my shoulders, I decided to make a book of REGRETS.

I got SOOOOO excited. All good artistic projects are fueled by great excitement in the maker, don't you think?

I was into crochet at the time, so I imagined I would crochet this book. It would be all prickly, made of thorns and other spiny fibers.... and inside would be something heavy, really heavy, a BURDEN. This purse would have to be dragged across the floor. Stones maybe. But how to write my regrets on the stones?

I arrived at the house and the woman (whom I had never met before in my life) served me tea. I broke into animated conversation about my planned project and disclosed my plans in lively detail.

I have blotted out the name of the woman and the purpose of my visit but I remember the look of total incomprehension on her face --more like horror-- as I yammered on and on and on.

I ended up making it out of wood. It became a purse of regrets and when you opened it up there was what I thought was my mother, but it looked more like my dear friend Miss Huber, or even me, as I look now.

If I can find a photo of that book, I'll put it on this web page. I sold it to a man in Teaneck, N.J. and it was in my show at the Noyes Museum.

Now that i am old, I am much more forgiving of myself, and my purse of regrets is much lighter.