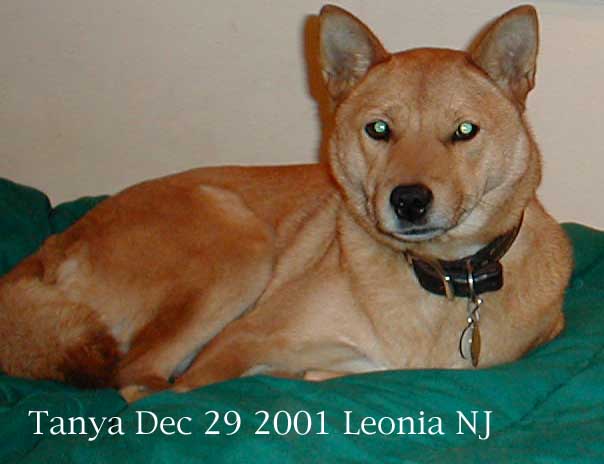 This is my jindo gae (gae means dog in Korean) Tanya. I adopted her from the Bergen County Animal Shelter December 22, 1999 when she was one year old. A Korean family had imported her from Korea and kept her chained in the back yard. Tanya told me right off that she never wanted to be tied up again so she has her wish.

My dogs are very gentle with family members. Here is my grandson Sammy, age 2 in 2003, pulling the tail of my black dog, Mookie. (The hound dog belongs to a neighbor.)

Tanya has a buddy and best friend. I adopted Mookie from the Bergen County Animal Shelter August 22, 2000 to replace my beloved golden retriever, Ginger. Here is Mookie with my grandson Sammy, then 2 years old, now 11.

I did not expect to adopt a prick-eared dog; i wanted floppy ears like my golden. But Mookie won me over with her soulful look, and when she escaped from her cage I knew I had to have her. Any dog that wanted to be adopted THAT MUCH deserved it. Mookie was found as a skinny stray in the Englewood NJ cemetery and she was caged in the animal shelter from March 15 until August when I adopted her. I believe she was scheduled to be put down because there was a photo and writeup on the wall opposite her cage, like the last chance before euthenasia. Perhaps it was a good thing that I went to the animal shelter the same day my golden retriever died, so as not to waste a second. I can't bear grieving, and I thought well if I can save a dog one more night in the pound, well then that's a good thing. Too bad Ginger had to get cancer and die in order to bring Mookie into my home, but now in 2012 I can say that Mookie is the perfect dog in every way. She is at least 13 years old. We are so lucky to have her. 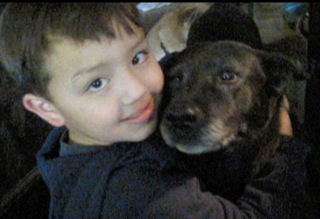 This 2009 photo shows mookie age 11 or 12 with my grandson JACK who is on the autistic spectrum with PDD-NOS. Mookie is very tolerant of JACK's love of dirt. The next photo shows JACK pouring dirt on MOOKIE's head. 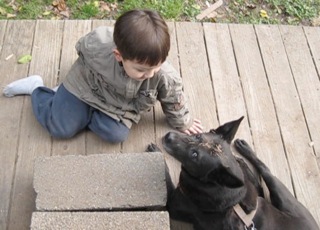 Mookie is part chow, which you can tell by her black tongue, straight back legs, and fat-bottomed paws. I think the rest of her is part Jindo because she looks and acts a lot like Tanya when hunting shrews (they leap in the air and pounce), and the final part is black lab because her body is shaped like a lab, fat and bulky, and she acts amazingly gentle and friendly with humans.

Btw, please don't use any of these photographs without receiving my permission in writing; they are copyrighted by me, marcia sandmeyer wilson, 2003-2012, Leonia NJ.