Check out my grandson JACK at the Dudley Allen Park in Leonia NJ, during the hours when dogs are allowed offleash (5 pm until dusk). Jack and dogs are a natural together. He has a form of autism called pddnos. One of his pdd-nos idiosyncracies is that he can become obsessed with sifting dirt-- his usual park occupation-- but dogs snap him right into the present, interacting with both dogs and people alike. What better therapy than that! 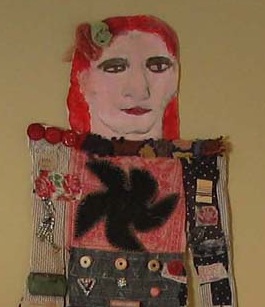 Check out the work of the fabulously talented JANET COOPER, who i met in a craft show years and years ago. We traded some of my tin cans for one of her elvis pendants, but i no longer make tin cans and she no longer makes bottle cap jewelry. JANET COOPER RECYCLED ART

Here's an artist from Tennessee with moody landscapes in alkyd, Bobbi Doyle-Mather .

Rutgers Book Arts Symposium is held every year on a Friday in November at the Dana Library of Rutgers in Newark, NJ. It features collectors and makers of artists' books. This is a photograph of a book by Gordon Murray.

Howard McAvoy makes stone and metal sculptures. He is one of my favorite buddies at art shows. Check him out. Stone Carvings by Howard McAvoy.

An Ezine Magazine article on Marcia Sandmeyer Wilson by Kathleen Menedez features Marcia's use of woodburning along with carving. It's got photos also, taken by Kathleen.

Susanna Bergtold makes drawings, etchings and woodcarvings that I love. She does not like to be photographed.

Ricky Boscarino is a marvellous artist who not only makes jewelry but made his entire house into a kind of folk art environment in Northwest New Jersey. 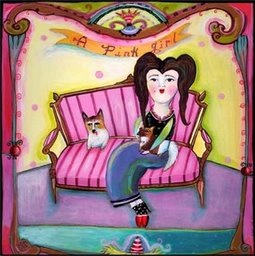 Wendy Costa used to do craft shows and I bought a lot of her cat jewelry. She is a multitalented woman, in many media, getting better and better all the time.

Here's an artist from Kenmore, Washington with lovely paintings and drawings. Amy Huddleston.

Beckybags made by my daughter, for sale on Etsy.com. 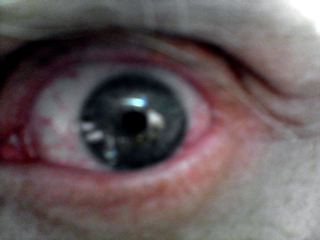 Here's a picture of his eye.

He plays and sings loud music. He played at the Filmore in San Francisco in the fall of 2008, but it's hard to hear is voice over all the noise. Some day I'd like to hear him sing in a nice quiet room.

An article by my daughter for Juxtapoz Magazine on Winston Smith who has done covers for the New Yorker.