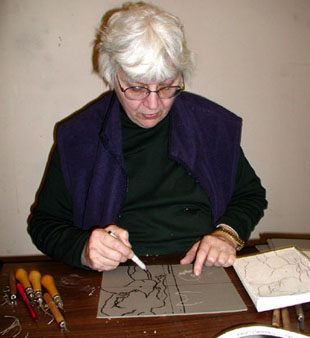 On Valentine's Day 2001 I got nostalgic for linoleum cuts, so I decided to make some. I motivate myself with little deadlines so I made a date with my artist friend Mary Olive Stone to meet for lunch and linocutting at the Newark Museum Arts Workshop in Newark, NJ. We brought along our supplies and went into an empty classroom to talk and work simultaneously. (I do my best artwork while talking. Apparently, a different part of my brain is used for each process.) 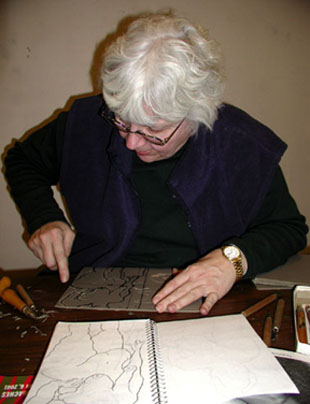 I had brought along some unmounted grey linoleum (purchased from Rembrandt Graphic Arts in Rosemont, NJ) cutting tools, and my ubiquitous sketch pads. I was at a loss for what image to use until I remembered the image that had made me nostalgic for lino cuts in the first place-- a nude woodcut by Matisse. With that in mind, I flipped thru my sketchbook until I found a drawing I had made at a life drawing session at the Art Center of Northern NJ in New Milford, NJ. Mary Olive took photos of me working with her digital camera. The left photo shows me copying my drawing onto the linoleum (I trimmed it to fit my sketch when I finished). The second photo shows me cutting the "block" with my linoleum cutting tool. 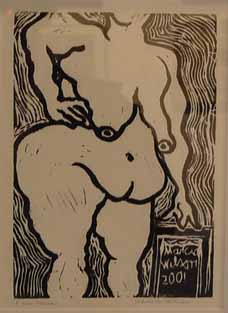 Here is the finished linocut as it appeared in the Small Works Show at the Old Church Cultural Center in Demarest, NJ. The show runs thru March, 2001. My work was photographed by a friend with a digital camera so the shadows are from reflections on the glass. I got up at 5 a.m. to finish that linocut for the show. Unfortunately, I had too much pressure on my etching press and the ink squeezed all over the place, so I ended up basically re-cutting the piece until 8 a.m. when I had to leave for an art show. But the reason why I enter shows is to force myself to do new work. Otherwise I'd just lie around the house eating snacks like a big tub of goo.

It's interesting that this linoleum cut looks like it was printed on brown paper when actually the paper was white. Mary Olive's digital camera seems to have better color than the one this friend used. Mary Olive said she bought an Olympus 3030 because her son had worked in a camera lab and said only the Olympus digital cameras did not need color correction.