STATE OF THE ARTIST LETTER 2010

It is February 2010, time to update my status. I am 73 years old now. This photograph of me was taken at my son Tom's apartment, to celebrate a visit from my oldest daughter, Diana, visiting from Hawaii. My daughter in law Judie is also in the photo, along with my three adorable grandsons. 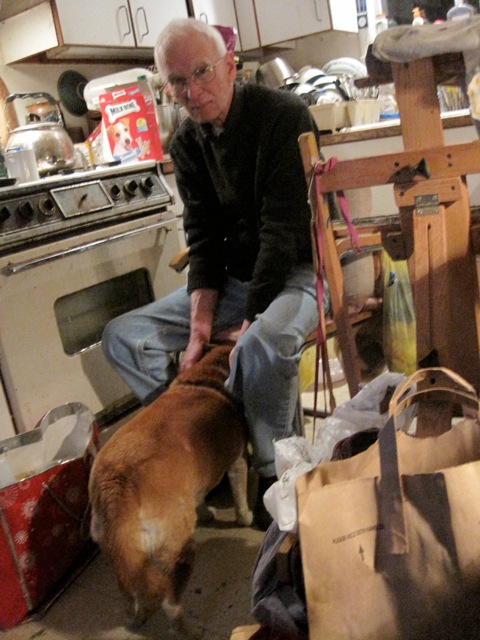 Here is a photo of the boyfriend petting the newest addition to my family, a very fat 10-yr old shiba inu named "xiao-xiao" which means small small in chinese. The boyfriend and I have been "together" since July 29, 1984 but he still has not popped the question, nor moved in. He says three husbands are enough for any woman, sigh.

A sad thing happened March 20, 2009. My oldest grandson, 19 year old Simon edison Cesar, died instantly after a motorcycle crash in Keaau, Hawaii. Here is a photo of his three sisters and his girlfriend, taken at the funeral. My two granddaughters are in the front. They wear black t-shirts with Simon's middle name inscribed in the same way it was tattooed on his chest. Simon's death changed all of our lives. We did not expect to lose him so suddenly.

I had not seen my grandson for twelve years, but he had grown into a handsome young man, with a love of speed.

My daughter Diana, Simon's mother, is standing on the left, with the open ti-leaf lei around her neck.

Here is my daughter Becky with her family in Oakland California. She now teaches Chess in the Berkeley Chess School, and she is working on a novel. My two california grandsons are thriving. Very athletic, artistic, and musical, just like their mom and dad.

I still live in Leonia, the most beautiful town in the world, and only a few miles from New York City. This is a photograph of my paintings hanging in the Leonia Library July, 2009.

Well that about brings me up to february 2010.

ADVICE FROM A FAILURE