Three Sock Dolls, made from five cotton socks -- three for the bodies, two for the arms, noses, and accessories. hair is made from little glass beads.

I got the idea of making sock dolls from artist Lois Morrison who asked me to make a sock monkey in trade for one of her artist's books. I ended up trading all of these dolls except maybe the woman doll to Lois Morrison for one copy each of her handmade (paper) books. She also makes cloth books, but I had to buy those with real money, not sock dolls.

Sock dolls are usually monkeys but I made the pink little man, stitching it at my college reunion in 1997, and I made two more dolls on a trip to visit my grandchildren in Hawaii. It is easy to sew dolls on an airplane.

These dolls were photographed by laying them on my flatbed scanner. They are my own designs, but the idea of making legs from the cuff of a sock came from traditional sock monkeys.

Here is a "new" sock doll I was working on in January, 2006. The lady in the background is Lois Morrison, who first taught me to make sock dolls. She also showed me how to do trapunto, which is the technique I used for the face. 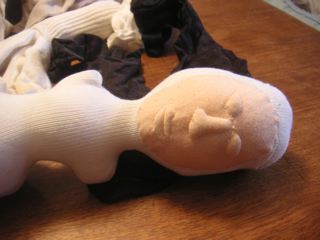 Another view of my sock doll in progress. I felt that her forehead was too high so in the next photograph you will see that i pushed the stuffing down and made a roll of hair with all the extra sock, reminiscent of a kind of page boy over a "rat" that used to be fashionable in the 1940's when I was an impressionable child. 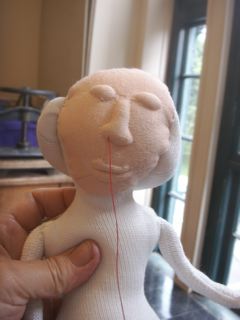 Sorry that I took this photo with the thread still hanging out of her nose. The way I make the doll shapes is by sewing and pulling the thread thru to the other side when I want shapes to go in, like nostrils. 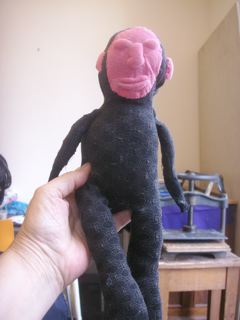 This is another new sock doll, made from one of my son's socks, if I remember correctly. The pink face is fashioned from a pair of my cotton underpants. I sewed on these dolls while taking my grandson on long train rides, which he liked to do when he was four years old. I bought a pass on amtrak and we went south to virginia, west to pennsylvania, and north to new york state. Sewing on sock dolls was kind of relaxing while the train rolled on clickety click thru the countryside, my grandson watching out the window. He liked to watch the tracks and signal lights the most. We stopped at children's museums in poughkeepsie and utica ny. 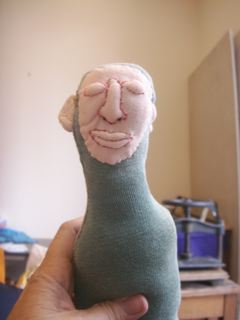 I let him choose which socks to sew on and he selected this green one, which has seen better days, but I guess it's ok to use old and worn out socks. I like the idea of giving new life to an old, discarded object. This is the beginning of a lopsided man doll.

By August 2006 I was still working on sock dolls. I have them in a little bag and bring them to places where I might be sitting a long time, in this case at Columbia Presbyterian Hospital with my daughter in law who went home shortly after having false labor pains. I am working on a blue sock doll that I have (unwisely) decided to turn from a man into a woman. More photos later. The cane on the bedside table is mine, because I twisted my foot somehow. It's all better now.